The Promess EMAP Electro-Mechanical Assembly Press (EMAP) System is the solution for every aspect of your assembly process including the push, pull, position, monitor, and controls. 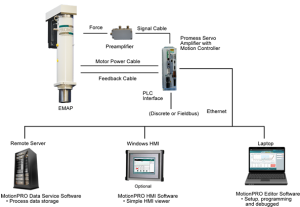 Listed below are the range of monitoring, testing and assembly applications for the PROMESS Electro-Mechanical Assembly Press EMAP Systems used by Builders and End Users.

The Promess EMAP offers you the most competitive, accurate, and efficient solution to any assembly requirement. The EMAP brings you the ability to literally clone your original assembly and then forces the system to duplicate – very precisely – all ongoing production. If for some reason, the system cannot reproduce it, a fault condition will tell you that you have made a component outside the desired parameters.

We are pleased to be serving customers in: